The first thing you hear about the Milford Sound is that Rudyard Kipling called it “the eighth wonder of the world.”  In a country full of touristy destinations, it’s the most popular place, by far, for tourists.  A deep channel that leads to the Tasman sea; it’s filled with waterfalls, seals, dolphins, penguins and ringed by mountains. 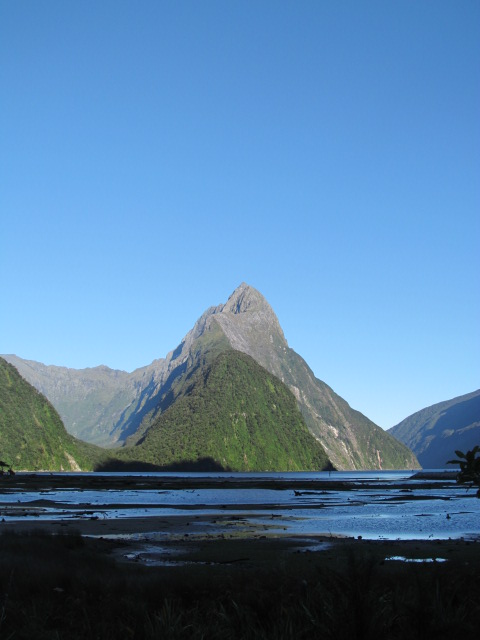 It’s not, of course, a sound at all, but a fjord.  To somewhat mitigate the error, the area around it is called Fiordland.  Misspelled, sure, but the sentiment is right.

I had been here twice before—once in 2006, on a kayak where we played with a pod of dolphins, and in 2008 when I hiked the Milford Trek.  But I had never taken the cruise.  They were all so expensive, but against the advice of just about everyone we went with the shorter, cheaper variety provided by Juicy Cruises.

One of the best views on the cruise.

Milford is an area famous for its rain (over 7 meters a year), and the forecast was predicting a real squall.  Strange it was, then, that we had a day with blue skies and no clouds at all.  It’s a spectacular place, to be sure, though it does suffer from the layers of hyperbole shoveled on it.  I’d say cruising is less fun, overall, than either hiking or kayaking, but it is a great way to take plenty of photos.