3/4 Being a Jerk: Hiking the Cocora Valley

Traveling inevitably turns you into an asshole. You go to some mountains near your hometown and in your heart you are disappointed that they are not as good as the Andes or the Himalayas. You go to the beach but despite your best intentions at being in the moment, you know it falls far short of the Bahamas or Thailand. Even restaurants are tricky–that curry cost 10 times what it did in India, and it’s not even as good. There might not even be a bowl of fennel at the counter!

Of course, you don’t want to compare things. You want to accept things for what they are. But our minds aren’t always so good at this. 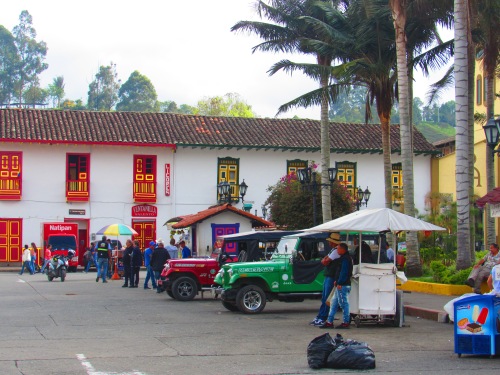 A bunch of Willys

Thus for most of the Cocora Valley hike, I was that jerk. It started off well; a cheap ride on a jeep called a willie, where I got to hang on to the back and take in the views. Then some downhill past (and around) cows and cats and farms.

get out of my way, la baca!

It was beautiful: lush and green with mist rolling in the hilltops. Then after a little climbing we entered a verdant rainforest. The trail climbed past several dodgy suspension bridges, crossing rushing streams and rocky riverbeds. There was even an optional part of the hike replete with hundreds of hummingbirds!

The problem was me. I have done so many jungle hikes: in Thailand, in Cambodia, in Myanmar and Borneo. There was no spark of anything interesting to me. It was like the daily commute to work; just something you do.  It’s not pleasant to be so jaded, let me tell you, but that’s where I was nonetheless.

starting to get good tho

This all started to change as we finished the big climb of the hike. It was steep and at a reasonably high altitude but only took about 30ish minutes of steady climbing before the land leveled out and a green mountain top loomed in front of us. Friendly dogs came up to beg for snacks as Germans sat on all sides of us.

It was nice. Still, I was all set to rank this as a rather mediocre hike in my own book of being an asshole. It was further annoying that there was a fee to enter, a fee to go to the hummingbirds, and another fee to finish the second half of the hike. None of those fees were super high but it contributed to the feeling of death by a thousand papercuts.

Then we headed down and got to the valley of wax palms. These are the largest palm trees in the world, growing up to 60 meters / 200 feet high. The species is the national tree and emblem of Colombia. Traditionally, the young leaves were used during ‘Semana Santa’ or Holy Week, and the wax was traditionally used for making candles and matches. Parts of the tree are also used to make fencing, beams and walls for houses.  Most importantly of all, the trees look really freaking cool. Comparisons to Dr. Seuss are very apt.

okay, I see what you’re saying

The last 1/4 of the hike (going counter-clockwise) was a brand new experience and fully worthy of the any and all hype. A few of the mirador (viewpoints) offered stunning panoramas. As the trek wound down, we entered a zone of shops and little roadside restaurants. There I got a traditional coffee before grabbing onto the back of another willie and heading back to Salento. 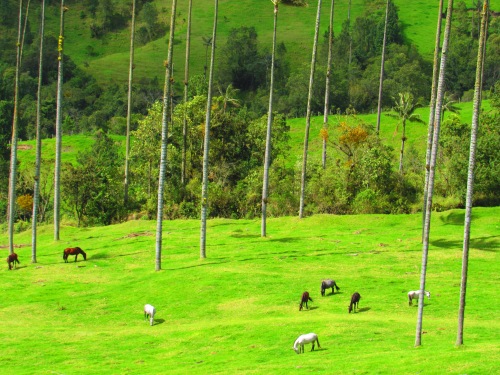 It’s a hike I’d do again for sure–the longest version of it links to the back of the Los Nevados National Park .