Teaching in Lopburi: One Month In

The first month in a new place often tends to fly by and the last thirty days have been no exception for me. It feels like I just got here but I’m already three weeks into teaching. 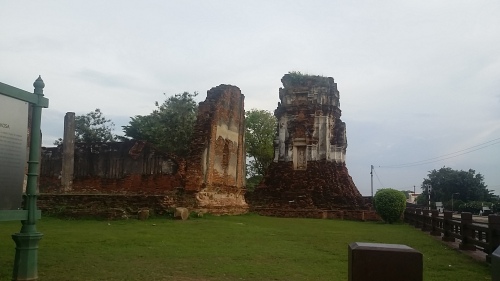 Streets go one way, so u-turns are a major part of driving. It works, except sometimes people can’t be bothered to go all the way to the next one and they drive backwards on the highway. In related news, Thailand has more traffic accidents than any other country in the world.

You wai everybody, of course, but there are different levels of wai’ing depending on if it’s to your coworkers, to a boss, to a monk, or to the king. Also you can never wai children, even though I sometimes forget this.

95 percent of Thais are Buddhists (Theravada ) and before they are 20 men have monk duty that lasts anything from a couple weeks to a year.

There are lots of critters about. About a tenth of all of the animal and all bird species on the planet live here (more birds than Europe and America combined!)

You can’t ever point your feet at pictures of the King.

Traditionally men end their sentences with krap and women end it with ka. However, I’ve heard that younger generations are mixing these up a little bit, which is cool.

You shouldn’t whistle in a temple (or maybe even in your house) because it will attract ghosts. Furthermore, there are little houses in front of almost every house to attract ghosts as well.

There’s not a lot of information on English & I so it was kind of a gamble taking the job here. However, as of one month in, I feel like they’re the best ESL company I’ve worked for. They pay on time, communicate as well as they can, treat us as human beings. I do have some quibbles on their teaching methodology, sure, but in terms of being a dependable company they are legit.

I wasn’t sure about co-workers in Thailand, as it has a seedy reputation, but the teachers I work with are professional and friendly.  It seems the burnouts and sexpats are either long gone or closer to the beaches.

View from my apartment

School is fine and it’s great living a couple hours from Bangkok. The flip side is that I’m not sure I like living in Lopburi. I chose it over similar positions in metro areas because after years living in massive cities I thought it would be a nice change. And there are things that nice–low amounts of pollution, cheap prices, vast views of greenery from my room. The ruins are nice as well and of course the nearby peacock temple and flower fields are great. Of course I enjoy cooking every night.

But what I don’t like about it is that it’s really hard to walk around. It’s oppressively hot, sure, but also there aren’t many sidewalks and there are packs of dogs that at night get a little aggressive. Not many people walk either.  There’s also not much to do here.  The weekends are already feeling pretty empty; I’m pretty good at keeping myself entertained but it’s a little challenging here. But thus far sweaty walks while listening to Alan Watts audiobooks has taken me pretty far.

Things are good. It’s a good space to be in and it hopefully I’ll have the space to get some writing done. I think I can save a bit of cash and in 11 months I’ll be ready for the next step.

3 responses to “Teaching in Lopburi: One Month In”