There are at least 43 mountains in Seoul, but surely none of them are as accessible and easy to ascend as Achasan. The highest peak on Achasan is only 287 meters, so it’s not exactly a trek through the Himalaya, but in addition to the requisite views of the city and Gyeonggido there are three elements that really make it stand out among Seoul’s myriad of mountains. 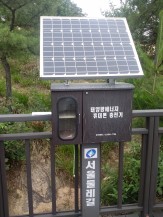 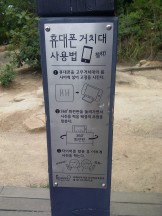 Back – Selfie Poll with instructions

These are for charging your phone and taking selfies, replete with instructions.

For me, no mountain in Seoul compares to the scope, beauty, and grandeur of Bukhansan. But it’s a real slog up to the peak(s) and there are always thousands of other hikers toiling their way up with  you. Achasan, on the other hand? From the subway to the peak it takes about 45 minutes (your times may very based on how turtley or roadrunnery you hike). Once up there, there are gentlemen selling socks and drinks, plus solar panels to charge your phone. All the amenities a person could hope for, really.

The hike to the top is short, yes, but from there you can continue along the ridgeline to Yongmasan, another 10 K. (I haven’t done this yet but hopefully will this summer.)

There very well could be a mountain in Seoul with a better effort-to-view ratio, but if so I haven’t found it.

There are staircases that go most of the way up, because that’s kind of how Korea rolls. But the funnest way to go up (and down) is by clambering up (and down) the sheets of rock. It’s never scary and the rock gives good grip. I haven’t seen another mountain with this texture and it makes Achasan a bit unique.

Most people know about China’s Romance of the Three Kingdoms, but Korea had its own Three Kingdoms period. (BCE37~CE668) This war pit the Shilla, the Baekje, and the Koguryeo against each other. It was a pretty even fight until eventually the Shilla enlisted the help of China and the rest was history, but for some time the Koguryeo held on. Many of the forts they built were located here. They’ve found remnants of 20 forts from the Three Kingdoms era, and the ruins of one of them is still visible ll fort of the Goguryeo era.

There’s also the Daeseongam Hermitage, a Three Kingdoms Tomb, a Cremation Site, and a Beacon Signal there, so those with an interest in history or culture get more than mere mountain. 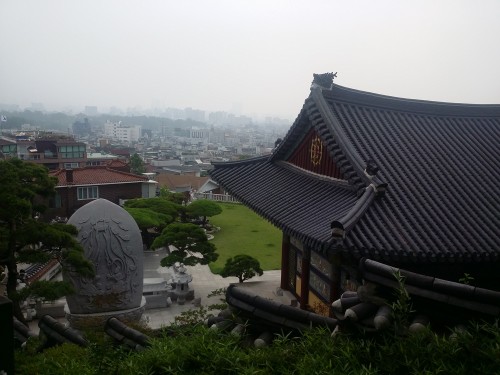 Start at Achasan Station, naturally. There are several ways up the mountain, but all them are accessed by leaving the station via Exit 2, then walking through some colorful old neighborhoods. Just keep the mountain in front of you and you’ll get there.

If you want to go via Hwayang Temple (pictured above), turn onto Yeonghwasa-ro and then keep going up.

You don’t need hiking boots for this hike, but sneakers are very helpful. Make sure you bring enough water as well. It’s better to hike in the spring and autumn, when temperatures are cooler and views are clearer, but this is nice hike any time of year.