This entire post is going consist of generalizations and over-generalizations (if those are even two different things?) Of course all of us know that weird is relative, and one set of cultural norms isn’t objectively less strange or more weird than any other.

That said, there are a lot of things found in the daily life of your average Seoulite (which is really the only part of Korea I can speak to) that might be surprising to your average westerner (or at least North American.) And with that in mind, I present the following list.

Thanks to Nahid for helping me come up with some of these items. 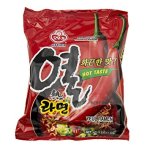 Ramyeon (also known as ramen) is popular, as you’d imagine. But it is maybe even more popular than you can guess, possessing perhaps the social cache of coffee in the west. Banks give you ramyeon gift sets when you sign up. popular Kpop stars endorse particular brands, optometrists and phone shops give away ramyeon too.

Plastic Surgery. In the west, there’s still a slight taboo against plastic surgery. Not so in South Korea, which is number one in the world (just beating Brazil). It’s a common gift to 16 and 18 year old girls as a coming-of-age present. Plastic surgery tourism brings tens of thousands of visitors every year. And when I was teaching Buddhists, all of the women (in their 50s+) said they had or would consider getting plastic surgery.Subway stations, especially in affluent areas, have many, many ads on the walls 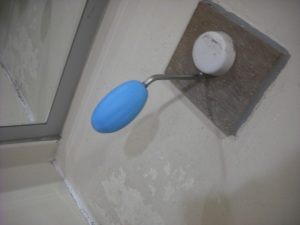 Washing hands after using the bathroom. Women and men alike use this time for a variety of purposes–to examine their reflection, possibly re-apply makeup or straighten their hair. Almost never to actually wash their hands. Culturally hand-washing is almost a non-existent concept. (I brought a bar of soap to my school bathroom during the MERS scare, and it lasted for 11 months.) This can be frustrating when you have to line up behind several people absorbed in their own reflections waiting several minutes for the chance to reach the water that no one else is using. (When there is soap, it’s a cool blue soap on a stick)

His and Hers food.  I have been to a few health food restaurants where they serve one kind of rice to men and one kind to women. There is even a pizza chain dedicated to serving women’s pizza (although for some reason it’s called Mr. Pizza). And it’s not as simple as women are assigned diet foods and men get more substantial portions–I think it ties into traditional medicine. 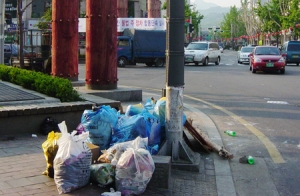 Trash cans/Rubbish bins are a scarce sight indeed around the city. You can walk hours without seeing one. Because of this, there are piles of trash on the street that become defacto trash piles. Anyone unwise enough to have a basket on their unattended bicycle will likewise find it full of trash. Many foreigners fill their pockets or purses until they finally encounter a receptacle.  (Why are there no trash cans? It is said  because that way North Korean Agents can’t use them for bombs, but it is also said that the real reason is that there used to be many more but too many people used them for their personal trash to avoid paying for trash pickup at your home.)

PDA. It’s really not okay to hug or especially kiss your significant other in public. But holding hands is okay! And not just couples, but same-sex friends. Old men, little girls, teen guys, business men, mothers out shopping with other mothers, it’s just kind of a cool thing here. It doesn’t happen all the time, but it’s not a strange thing to happen.

Facemasks You wear a facemask either when you are feeling sick, or when you are not sick but everyone else is. Other times are in spring (Yellow Dust Season, when the winds blow sands from the Gobi desert throughout the city) or on a high pollution day or when biking along the river. In other words, any day is a good day to wear a mask. The one time I wore one, back when I had the swine flue, it was really hard to breath and vastly uncomfortable, but I guess its something you get used to.

Getting shoved. Personal space is fetishized in the west, but isn’t much of a thing in Korea. If you are in between an adjumma and her seat on the subway, she won’t even think twice about shoving you out of the way to get to her seat. For you to react to this shove in any way would be considered very rude indeed.

There are lots more things I could cover but I think that’s good for now. If you want to add any, please tell me in the comments.