That old myth about going out in Korea being cheaper than cooking at home keeps cropping up and it always bothers me. Granted, many food items here are expensive, and costs keep going up. But it’s still cheaper almost every time to cook at home.

In Seoul, it pays to shop seasonally here. Unlike North America (and probably other places) there is a seasonal shift to produce prices here. Apples are super cheap in September, for instance, and now is Hallabong season. I think this is a good thing, environmentally of course but also habitually. Now some of these seasonal surpluses are strange to my eyes (why oh why is strawberry season in January?) but overall it’s a good system.

The area I live is kind of adjumma central–there aren’t really any bars or even noraebongs. In their place are lots of little markets though, and many good places to stock up on fruit and veg.

And stock up I do. The below list was all purchased at a biggish mart, which isn’t the very cheapest place around but it has good selection. Here’s a look at a week’s worth of veggies for two people. The total price is a little high because it’s a big bag of garlic but even still you can see how cheap it is.

Now this isn’t a complete meal, of course. You’d probably want to get a carb like rice (around $5 for a kilogram, or maybe $7 for 800 grams of brown rice) or udong (about 50 cents a package) or pasta (about 2.50 for 450 grams) or if you venture into Itaewon you can even get something exotic like basmati rice or couscous, though those start to get more expensive.

The shiitake give you a little less protein than your standard mushroom, but not to worry. A big block of fresh tofu is about 2 dollars or the smaller, packaged ones are usually around 1 dollar.

Add it all together and a big, healthy meal with local produce is only a couple of dollars. There’s just not any restaurant that can compete with that. The cheapest comparable is a bowl of kalgooksu, which at a cheap place is around 4 dollars for a big bowl. For less than 4 dollars, this equals 4 bowls so it’s quite a bit cheaper. 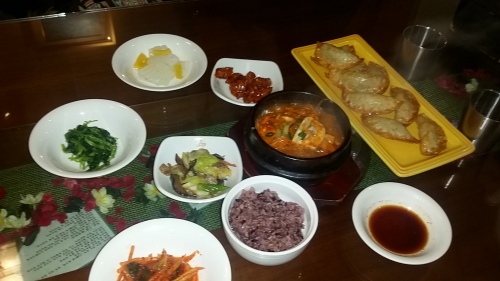 By contrast, this meal from Osegye Hyang, which had mandu, soup, and a gluten/rice dish (plus banchan) costs about 22 bucks.

Now I understand most people want a little more variety in their lives than daily iterations of the same meal. And not everyone is willing to make the effort to cook every night, even when they’re tired. Those are different reasons, though, from the tired old falsism that it’s much cheaper to eat out than cook at home. (And not very good reasons, either, in my opinion, although that’s neither here nor there.)

Yes, things are considerably more expensive now than they were 5 years ago but it’s still possible to cook for yourself and still not break the bank. That’s all for this installment of my rant. Thanks for listening!