Telling Tales in the Beaver State: the Many Narratives of Oregon

“Time overlaps itself. A breath breathed from a passing breeze is not the whole wind, neither is it just the last of what has passed and the first of what will come, but is more–let me see–more like a single point plucked on a single strand of a vast spider web of winds, setting the whole scene atingle.”
Ken Kesey, Sometimes a Great Notion

It’s the rain that comes to mind. Oregon, in fact, comes with quite a few associations—tumbling waterfalls, lumberjacks, hippies, microbreweries, vegan food, indie rock, pine trees, and dying oxen in the pioneer game Oregon Trail are some of the more obvious ones. But it’s the ceaseless precipitation—Oregon sunshine, it has been dubbed—that most indelibly characterizes the state. Funnily enough, two-thirds of Oregon is dry desert and the actual rain-is-coming-down-wet days are vastly outnumbered by dreary-gray-but-dry days. 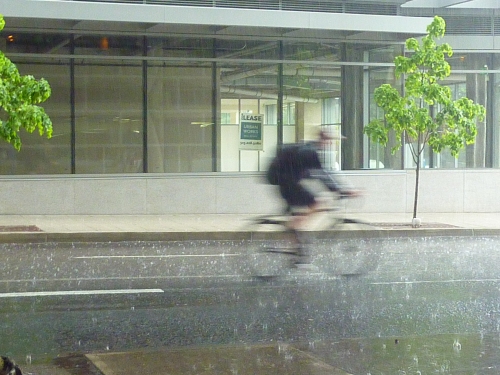 Portland in the Rain

It is an insular state; a place where locals are still afraid that word will get out how nice it is. The slogan of “Welcome to Oregon. Now go home,” is apocryphally said to have appeared on the California border. That’s not correct, but it is true that in the seventies Governor Tom McCall famously told a news reporter: “Come visit us again and again…But for heaven’s sake, don’t move here to live.”

It is also a quirky state, as indicated by the famous mantra “Keep Portland Weird.” This is a state that calls hazelnuts “filberts,” a state that chose not a wolverine, grizzly bear, or panther as its state animal. Nope, Oregon is the Beaver State, and disproportionally proud of it. When 39th Avenue was renamed to honor Caesar Chavez, there was significant effort to likewise redub 42nd in honor of Douglas Adams. And despite the rain, 40 inches a year in the Portland area, it’s a place where carrying an umbrella is seen as a major character flaw. (But to really annoy an Oregonian, pronounce it “Ore-e-gone” rather than Or-eh-gin.)

That combination—idiosyncratic, parochial pioneer stock, kept inside for too many bleak wintry days—has led to the creation of some great art. Being that the great cultural homogenizers in this modern world are film and, to a lesser extent, literature (fine arts, etc are not part of society’s narrative in the same way), Oregon hosts a trove of treasures waiting to be discovered.

A belletristic journey could take you across the entire state, from the Shakespeare Festival in Southern Oregon to Trek in the Park in Northern Portland. A comprehensive list would be unwieldy and unnecessary, but here are some of the top places to visit in Oregon for literature and movie lovers alike. 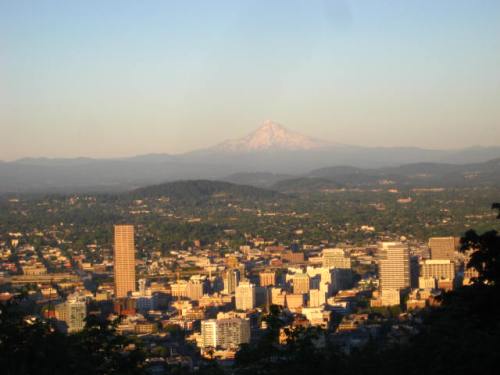 Naturally, the biggest city in Oregon has the biggest presence. In addition to current shows “Grim,” “Portlandia,” and “Leverage,” Stumptown has seen its share of cult films like Drugstore Cowboy, Mr. Holland’s Opus, and The Hunted.

Simpsons creator Matt Groening is from the Portland area, and visitors will notice many street names with familiar names (Quimby, Lovejoy, Flanders, Kearney, etc. While we’re on the sidetrack of NW Portland streets, the street spelled “Couch” is mysteriously pronounced “Cooch.”)

Those who remember Henry Huggins and Ramona Quimby can discover the real Klickitat Street, with statues dedicated to the characters in nearby Grant Park. Ursula K. LeGuin’s classic Lathe of Heaven uses the backdrop of Mt. Hood and other Portland landmarks most memorably. Parts of The Road and The Shining were filmed near Portland as well.

The movie was neither set nor filmed in Portland, but Fight Club author Chuck Palahniuk used Portland landmarks in the book. His nonfiction Fugitives and Refugees is a bizarre travelogue of some of the city’s weirder sights. 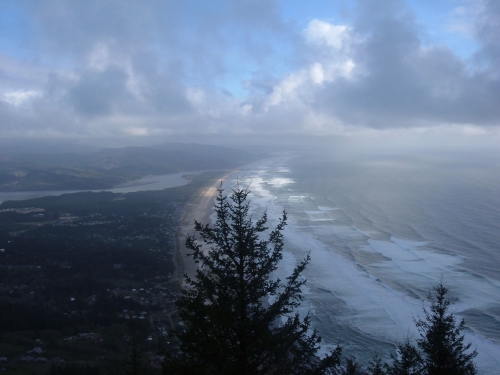 Moving on from Portland, it’s a 90 minute drive over the Coast Range to the Pacific Ocean. The Oregon Coast is wild, wind-blown, and wonderful. Gnarled pine forests grow to the sea, long stretches of sandy beach have more shells than people, and small-town bookstores and charming restaurants make up the bucolic whole.

The oldest town west of the Mississippi, not far from Lewis and Clark’s winter settlement, this city of one-percenter John Jacob Astor is a capital destination for those who love eighties films. We’re talking Goonies, Kindergarten cop, Short Circuit, and Teenage Mutant Ninja Turtles III. (The Ring 2 was also filmed here, but the less said of that, the better.)

The next stop of the entertainment tour is the home of literally the biggest star of the nineties.

Yes, I am referring to Keiko, the world’s most famous orca, who found fame in Free Willy. The film was mostly shot in Oregon, and Keiko was a resident of the Newport Aquarium for some time before being sent back to Iceland. (Where, sadly, he kept hanging out with humans and died of pneumonia.)

Newport, along with nearby Kernville, is also the film setting for maybe the greatest Oregonian novel, Ken Kesey’s Sometimes a Great Notion. This tale of a small-town lumberjack family is as quintessential to Oregon as a cloudy day, and even if the filming locations are hard to find, the towns themselves are surprisingly unchanged from the early seventies.

There is plenty more to see on the coast, but for purposes of our tour we will now take the 20 to the 5 and head inland to Oregon’s most famous hippy college town.

This college town is chilled out even by Oregon standards, a sprawl of co-ops, farmers’ markets, and scenic bike paths. The nearby Oregon County Fair, an event every summer, is like time machining back to the sixties, and Cougar Hot Springs are another way to meet some of the real free-thinkers of the world. (The slogan “Make Love Not War” originated in Eugene in the sixties.) Eugene itself is famous for two very different films.

The first, Animal House, was filmed in Eugene and nearby Cottage Grove. University of Oregon parties might feature fewer togas these days, but pre-funking a Ducks game would just about capture the right Jim Belushi spirit. (U of O was not the original setting for the story, but after turning down the chance to be the setting of the Graduate, the University pushed for this one.)

In Stand by Me, Brownsville filled in for the fictional town of Caste Rock. Other scenes were shot in Eugene, Franklin, and Cottage Grove. Recreating the sets of this film would be fantastic fun, but I recommended leaving out the leech scene.

Finally, for the runners of world, both Prefontaine movies were set here in the land of Phil Knight. 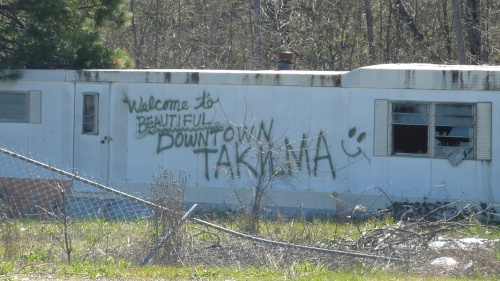 Ashland is home to The Shakespeare Festival, which was founded in 1935 and is arguably the greatest place outside England to encounter the Bard. There is outdoor theater in the summer, where you can pack a picnic dinner and get spat on by enunciating thespians. More locally, Neil Gaiman’s Coraline was filmed by Portland’s Laika, and set in Ashland.

Jim Jarmush’s trippy existential tale Dead Man was filmed all over Southern Oregon, including Applegate, Rogue River, and the hippy bastion Takilma. You too can wander these areas with No One, meeting characters too strange for fiction.

And although the film of One Flew Over the Cuckoo’s Nest was filmed in Salem (the state capital, between Portland and Eugene on the interstate) and Depoe Bay, a more interesting use of time would involve a visit to Ken Kesey’s farm in Southern Oregon. The infamous bus Further still rests there, dredged from the swamps by his son Zane and surviving members of the Merry Pranksters.

It’s true that using art to form your narrative in this manner, you miss out on places like the surreally gorgeous Crater Lake, the charming town of Bend, the high desert, the Wallowa mountains, and the Columbia Gorge But the variety of film and literature that has been set, written, and filmed, here would make for a truly entertaining entertainment-based visit.

3 responses to “Telling Tales in the Beaver State: the Many Narratives of Oregon”