A view to a fjord

The weekend of camping and hiking and biking and climbing at Trolltunga was hard to beat, but if anything could beat it 4 days of free camping in the Jotunheimen wilderness would be close. The Jotunheimen Mountain Area lies between 1,800 and 2,400 metres above sea level. Most of the valleys lie above the treeline, at an altitude of 1,000-1,400 metres above sea level.

Everyday I’m on the bus

I left my friend Hanne’s house in Drammen and bussed into Oslo. From here it was easy to find a bus up to Gjendesheim, gateway to the land of the giants. Buses in Norway are nice, rarely full, equipped with free wifi, and devastatingly expensive.

The ride up into the mountains was not quite as nice as the drive out to Odda (gateway to Trolltunga) but it was ridiculously photogenic. We had a brief stop but only 5 or 6 hours later we pulled up next to the not ugly Lake Gjende. The lake is long and narrow, 18 kilometres long and 1.5 kilometres wide at its widest and it is located 984 meters above sea level.

Norway is cool because you can camp for free anywhere on public land. Cato had loaned me his tent and I wandered around for a little while, staking out the possible sites. It was a wednesday so there were plenty of options and I got a nice area. I put up the tent, threw my bag in and then walked around the lake and read some Brent Weeks. The sunset, around 11:30 pm, had nice pink clouds and it was one of those nights that I felt truly lucky to be where I was. 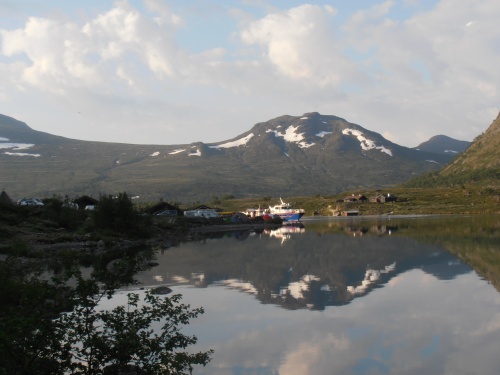 The next day I got up and wandered up in the hills for hours, following signs that sounded like they were from Middle Earth. Places like Styggebreen Glacier and the dramatic mountain formations of Hurrungane, the Raudalen Valley and the distant peak of Glitterheim, the Fairytale Ice Glacier and Dimrill Dale. (Okay, that last one is from Lord of the Rings, but it fits, right?) 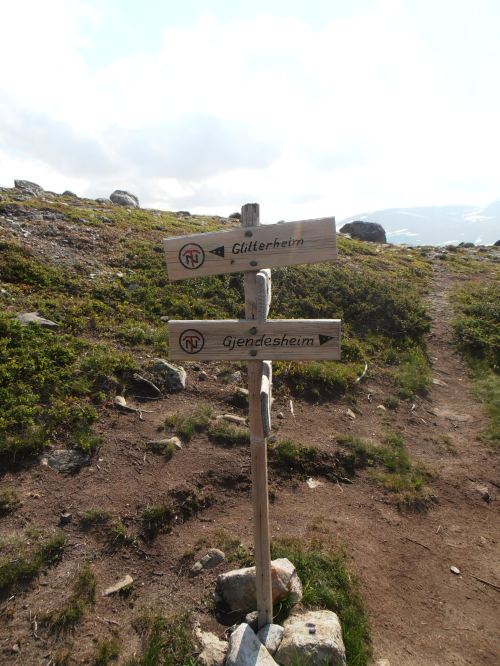 Aragorn wishes he’d had these

Normally I hike with music or audio books, but something about the stark wilderness just captivated me, and I was totally in the moment. I also had the trail to myself 95 percent of the time, which was unexpected and quite grand. Puffy clouds wandered the sky like lost sheep, and in a nice bit of symmetry, twice I bumped into random sheep wandering the ground like lone clouds.

I got back to my tent some hours later, ate some peanut butter and knekkebrød and read more of the Brent Weeks book. It was hot and I had a swim in the frigid Lake Gjende. My buddies Cato and Hanne, on their massive Norway summer tour, arrived that evening. We walked a bit around the lake before Hanne flagged down a young guy on a boat and got us a ride back. Funnily enough, this kid of 12 was in such an isolated valley that neither of my Norwegian friends could really understand him, and the words they did pick up were archaic and out of use.

Pining for the fjords

We watched the sunset again before retiring. We had to get up early to catch the ferry to start our hike, and I was out of my tent by 6:30 am. We were aiming to join the 30 thousand people who hike to Besseggen each year. It’s Norway’s second most popular hike, behind only the redoubtable Preikestolen.

Thunderstorms were forecast for the day so we made decent time. The Besseggen hike has some climbing but it’s very easy if you don’t go too quickly. We had a few stops to eat trail mix or fill up our bottles from the streams, but for the most part we walked through the crazy cool, alpine nature. The thing about Besseggen that is so cool is that you walk between two different colored bodies of water.

We easily beat the storm, and got back to the camp in time to drink some wine and play Cards Against Humanity. They were off the next day, pitting themselves like the nine walkers against the mighty Mt. Glitterheim. And I bussed back to Oslo, meeting some cool Norwegians on the way (including one who had hiked from Oslo to Gjendesheim, a hike of 8 days! Sadly, he reported that most of the hike was boring and had only had one night in the Jutenheimen park.) 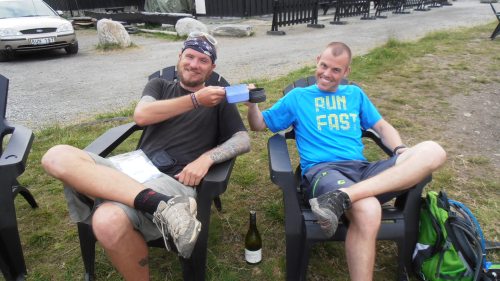 It was a bummer to say goodbye to the fjords and mountains and sheepy clouds, but at the same time I hadn’t seen anything of Oslo and urban tours are always exciting. And I had the perfect tour guide, which I’ll talk about in the next post.