One of the things I really wanted to see in Norway was Troll Tongue. A long sliver of rock in the fjords that is both beautiful and troll related, it was a must see. With that it mind, my friend Hanne planned out a trip there my first weekend.

I set out with Hanne and her buddy Cato on a Friday afternoon. With bikes and tents and blankets and pillows and books and board games, we were a full Audi. And yet somehow we managed to pick up a German hitchhiker (wearing an inverted Friar Tuck haircut) and driving through ridiculously pretty scenery. 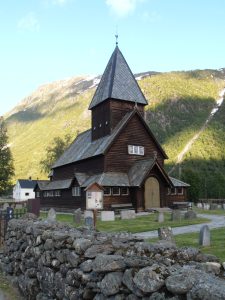 I was jetlagged and tired but the views were absolutely captivating and I couldn’t look away. We drove through fjords, stopped at a stavkirke and a waterfall.

We set up camp on the side of the road–it was still well light even after 11 pm. Our tents went up and we had a quick dinner.

I had bought a small jar of “taco sauce” salsa and corn chips in a small town for only about 7 dollars–good deal in Norway!. I had some for dinner, where I noticed the salsa improbably decent–better than anything in Korea, for instance.

When I commented on the quality, Cato nodded. “Yes. We do Mexican food well here. In fact, every Friday is Mexican food night here.”

Cato just looked at me in incomprehension.

Hanne, who lived in the US for some years, shook her head and said “No one ever understands me when I say this either.”

Two more friends showed up and we all got some sleep. The next morning we woke up, and after packing our tents, hopped on mountain bikes and then rode for 10 K or so on an awesome trail. Then we hopped off and hiked up for 10k more up loose boulders and past verdant green pools of snowmelt water.

And then the fun began. Himmelsteigen, the stairway to heaven; a via ferrata that goes up sheer wall for 200 meters. I was actually quite nervous about this part as I’d never used climbing gear before, not to mention that lots of this part included hanging off a sheer rock wall. 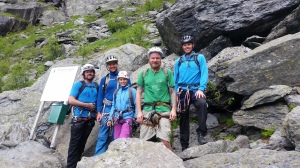 None of it was too hard though and we made our way to the top. Here we joined a small queue of jolly Norwegians to take our photos on the Troll tongue.

And then it was a chilly wait on the top of the Stairway to Heaven while others finished climbing up, and a reverse via ferrata, hike, bike ride back to our tents, with a quick dip in one of the frozen pools.

Stores stop selling beer at 6 pm on Saturday. Post hike, we raced down to get some. Everyone not driving shared a beer in the car as we drive to the cabin for the night. It’s quite common in Norway to have a winter cabin by a ski slope, and Hanne and Cato’s co-worker had invited us to stay the night. We were treated with the warmest of hospitality.

Our arrival was toasted with shots of Jaegermeister, followed somewhat later by a Danish version that is more bitter and even more like cough syrup. At dinner, the owner of the cabin brought out some local microbrews, including an IPA that was incredible. We stayed up way too late in the light of the midnight sun before crashing in a cozy bunkhouse.

Of everywhere I’ve been in the world, Trolltunga ranks really high as one of the best places I’ve ever been.

One response to “Yeti Hikes: Trolltunga”