Last night saw the worst night sleep ever.  Too cold, too high, too much hyperventilating.  Up at 5:20 and out the door to ascend the 5545 meter high Kali Patar.  Back at 8:40 and lets just say those 3.5 hours did not feature the easiest hike of my life.  Hiked in my thermals for the first time–and needed them!  Even with gloves and socks, my hands and toes went numb.  The water in my nalgene froze, the lid iced over and an inch of ice covered the top of the bottle.  It was so cold that my ears painfully constricted around my piercings.

We’d had to leave so early to see the sunrise.  But even at the beginning, it was light enough not to need headlamps.  The sky was a beautiful pre-dawn blue, and a few late stars still twinkled in the frosty sky.

It was here that I learned despite paying 5 dollars to recharge my camera, it was dead.  (I had the battery in my glove, warm next to my skin, but no dice.)  And the hotel refunded me when I got back and told them, so it wasn’t a complete disaster.  And it’s not like the sunrise over Mt. Everest was that beautiful….Plus my phone camera sort of worked that day and I borrowed a great photo from Mads. 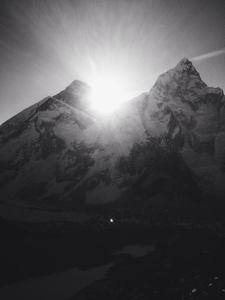 Sunrise over Everest – courtesy of Mads

Anyway, the mountains were as stupidly gorgeous.  All I could hear was my heart beating (like a jungle drum.)  The guys were ahead of me and only grew further away, but I passed a few other people. all of us gasping and with frequent stops for rest.  I stopped 15, 20 times easily, just to calm the beating of my heart and collect enough oxygen to push on another couple of dozen meters up.

Then, just short of the Kali Pattar summit, the sun popped up just left of Everest.  I was beside a markedly collected Singaporean dude we had originally met in Namche and we enjoyed ogling nature’s naked beauty together.  It was a rather amazing, certainly on par with Poon Hill.  Completed the last bit of climbing and the panoramic views were amazing.  And now I had a new highest point, higher even than the Annapurna’s Thorong La.

Mads had no gloves and, shivering, he booked it down with bloody hands.  Ash was dry-heaving up and down the mountain, and Jamie’s headache was so bad that he drank all his water and everyone else’s too.  Most of the people who had been scraggling up with us turned around well before the top.   It was beautiful, but it was time to go back.  Plus, with the sun up, and us in thermals and jackets, it was growing too hot.

Coming down was much easier.  Had a hot lemon and tried to decide how far to push on.  Legs were tired and spirits were low, but it’s a nice sunny day and we didn’t have to go super far.

Stopped at a cool pyramid/research center hidden in a valley.  Mads and Jamie went in to explore. I sat with my pack and journaled.

What a cruel end to the day.  Met lots of yaks as we came out of Gorak Shep and had to queue up on the mountain trail a bit, but still made good time back to Labouche.  It was 11:30 and some of us wanted to stop for lunch or perhaps even the night, but the rest of us felt like pushing on.  (A common theme for poor, outvoted constantly hungry Jamie.) 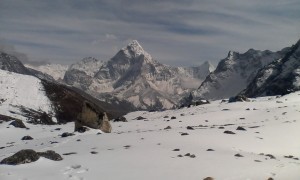 We walked for a while on mostly flat, easy trail.  Crossed a frozen ice lake that made all of us a bit nervous, but there were some footprints and we’d seen people crossing it two days ago.  From there, we climbed up to a steep ridgeline and didn’t see any more trekkers again on the trail.  I was in the back so put on my headphones and listened to some music while walking along a narrow, icy path with a huge cliff on the left.

We stayed on the ridgeline, with gradual ups and downs for some time and though it was sunny a cold wind blew in and everyone was way ahead of me.  I saw to cobalt blue birds that were such a vibrant shade they looked like they’d been painted.  Nose was running like a faucet, not that there are faucets or taps or sinks anywhere up here.

New mountain views, really close up.  But the trail became icy and muddy, and was hard to follow in parts.  Still, made progress and after an hour or two saw Zhongla–right across from me, but between us was a 300 or 400 meter deep valley.  What a cruel end to a long day.

Had several near falls and was congratulating myself on staying off my bum when I had the slip of the trop.  Fell hard onto some ice into a large swath of mud.  Tried to use some snow to clean myself, but just spread the mud around and got frozen hands in the process.  The trail appeared, disappeared, reappeared as I sank below view of the town.  I crossed some streams, caught up with a lagging Ashraf, and after one more steep climb, arrived.

The “town” of Dzongla

There’s not much to the town–only two places are open and the one offering free rooms (each to ourselves!) easily won.  Ate some sherpa stew while staring at yaks rummaging in the snow outside the window.
We’re all pretty tired and so might take a rest day tomorrow.  The next day is the pass, and sure to be the hardest day of the trip, so resting up here might make sense.  (Though one of us chafed at this break.  Poor Jamie!  We were not the right crew for him.)