Signs from a Thai Zoo

We went to the Chiang Mai zoo on Christmas day. Not being a zoologist, I wasn’t sure how big or interesting it would be. But after paying 100 baht (3.30 USD) to get in, I was surprised at how vast it was. The Chiang Mai zoo is huge, sprawling even. However, it’s a little janky–they charge you another hundred baht to see the pandas, something you’re not informed of until you get to the panda enclosure. We chose to skip seeing the panda and instead wandered around the park-like environs.

I am slowly learning that, along with pictures of the full moon, zoo pictures are never that interesting. So I didn’t take any animal pictures. Instead, I found some great signs and buildings dotted across the zoo.

As far as I can tell, there were no sharks in this building. Still, it’s a pretty rad 3D shark attack.

I wouldn’t have imagined that this was a problem but then again…Asian zoos. We didn’t pet them, but it was nice to see a penguin (A possible replacement for Santa Claus) on Xmas day itself.

Lovely, expensive panda. Well, not really expensive, as most Westerners would pay 7 dollars to go to a zoo with pandas. But when it’s as much again as you already paid, it just feels too expensive. 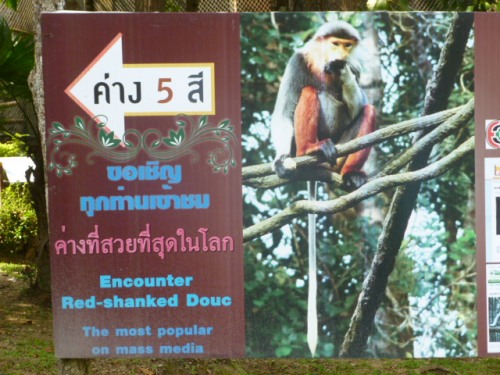 You gotta appreciate a monkey who is “most popular on mass media.” The fact that he has such a sweet name is just a bonus.

Visions of birds being trained to ride bikes, while ethically confronting, are quite hilarious, and a small part of me was sad not to see this really happen. What does the sign mean, you ask? We couldn’t figure it out, but I’m sure it’s something pretty great. 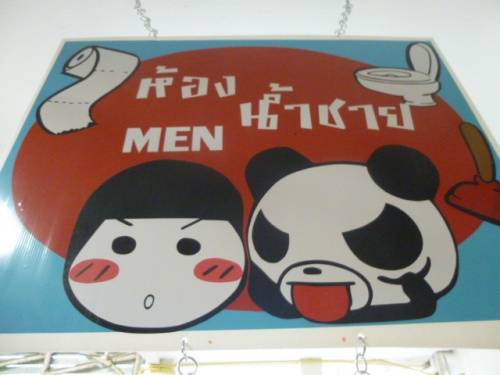 I’m sad to report that while I used the facilities, there was no panda in the men’s room, teasing me and making me feel all shy. You really can’t trust advertising these days.