Yeti Fails: Up a Mountain, Down a Kindle

The hardest part of the Annapurna Circuit, for just about everyone, is the day when you cross the pass.  Imagine waking up at 5:30 am in subzero temperatures at High Camp.  Your body is sore and feet are blistered from the last week of hiking this far.  You didn’t sleep very well last night—and how could you, at 4800 meters?  It’s high enough that Altitude Sickness is a real worry-both times  I’ve seen emergency helicopters from Kathmandu come to rescue those too sick to continue.

From High Camp, you climb 700 meters higher, then descend triple that distance down, all the down to the town of Muktinah.  This day can take some people 12 hours to complete, and it leaves almost everyone with achy jello-legs.  One of our companions vomited from the height and exertion.

This is the easy way, too.  Coming up the other way is much harder.  Needless to say, the town of Muktinah is a rather terrible place to realize you left your Kindle at High Camp.  I’d been reading in bed the night before, and just left the kindle under the pillow.  With all the hustle and bustle of getting over the pass, I didn’t even think about it until that evening.

When I realized this had happened, I went to the lodge owner, a pleasant he-she and told him my story.  He didn’t understand what a Kindle was (a running theme) but he had the number for the lodge and gave them a call.  But he couldn’t get through—the phones were down, and presumably were going to be for days or weeks.

I walked down to the police post, but language difficulties ensured a lack of resolution.  The next day came and I asked the lodge owner again.  He/she advised checking with the police at the next (much larger) town of Jomsom. 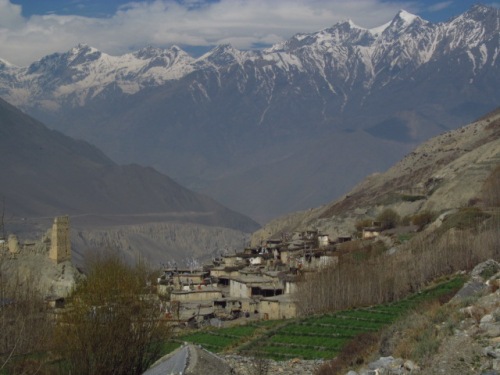 This town was 30K away, so it took a full day’s hike—through dusty villages, across ice-blue rivers, past medieval rock-walled towns and stupas—to reach it. (All the pictures in this blog from from that day’s hike.

It was here that things began to seem absurd.  I explained my situation to the police at their checkpoint.  Again the lack of understanding of what a Kindle is was problematic.  It’s hard to explain what an electronic book is to someone who is illiterate.  After trying on failing with the two guards, they brought someone in who spoke English pretty well.  As I repeated my story, it decided to rain.  At last the guy told me to go to another branch of the police and fill out a stolen goods form.  It took some finding, but at last, dripping wet, I walked into a compound guarded by gun-toting police.

I repeated my well-honed story, but the language barrier was a problem.  At last I managed to convey that I wanted to fill out a form.  The guy, one of the nicest I met during this process, shuttled me into an office and went off to fetch a form.

I waited in a room for 10 minutes, dripping slightly and listening to the rain, watching people come and go.  Some of them seemed to give me strange looks.  Finally, an officious man with excellent English came up to me and said “Why are you here?”

I told him, and he said “Maybe you would have better luck with the police down the street.”  Oh.  That explained the strange looks.  Just then, the nice guy came back with the paper.  It wasn’t a form.  It was just a sheet of A4 paper.

I refused it.  “Sorry, guess we came to the wrong place.”  He insisted, so I grabbed it and re-entered the rain.  The police weren’t actually too far away.  The compound was still militarized from the Maoist troubles, and there were lots of guys with guns here.  Eventually I was escorted into an office.

Here I got to repeat my story 4 or 5 more times, trying to explain my story in great detail.  Not only did I have to explain what a Kindle was, I also had to explain the town of Muktinah and High Camp, and the very existence of the Pass.  The guy had idea of the geography at all.  Weird.

He asked if I had paper, and I did! I filled out the story with the four part harmony, and wrote it down there, just like it was, and everything was fine.  I described what a kindle was, wrote my name, my email, my guesthouse name and number.

Now he repeated my story to me a few times.  The entire exchange had been odd, but this was markedly odder.  There was something I was getting.  I left, not sure if anything good had come out of these efforts.

It wasn’t until the next day that I guessed he wanted a bribe.  It hadn’t even occurred to me at the time.  Even if it had, what would I do?  Drop it into his lap?  Attach it to the paper?  Slip it into his palm?  And then there was a matter of how much I would give him.  No, this is a world I know not of.

Still, bribe or not, all he had to do was call the police on the other side of the pass.  They had a station close to High Camp.  They could have grabbed my Kindle and sent it on its way to my hotel.  He didn’t.  Or maybe they didn’t.  I checked at the guesthouse a dozen times but nothing ever arrived.  And my Kindle, for all I know, is still sitting there at 4800 meters, waiting for someone to claim it.