After our rather soggy trips to Taranaki and Tongariro, tramping – in my mind, at least – had come to mean cold nights, wet clothes, gale force winds, pouring rain, sleet storms, snow, hail… You get the idea.

Waikaremoana, with its sunny skies and warm nights, came as quite a shock. (I didn’t even wear my thermals, guys.)

Despite being one of the 10 Great Walks in New Zealand, Waikaremoana hadn’t really crossed my radar before this trip. Tucked away amongst unsealed roads, about 60km away from the nearest city, Wairoa, it’s a little tricky to access. Unless, of course, a family friend happens to own a bach about 500m away from the trail head.

The Department of Conservation (DOC) recommends 3 to 5 days to complete the 46km tramp. Due to a combination of full huts and bravado, decided to try for 3. The tramp can be done in either direction. We opted for the one shown above– ie. the one that got that horrendous climb out of the way as soon as possible.

We (Ahimsa, my brother in law, Damian, and I) and started out early, with the aforementioned climb looming ahead. The track starts off fairly gently, but steepens quickly. Damian flew up, with Ahimsa and I making slightly less impressive, but still fairly respectable, time. 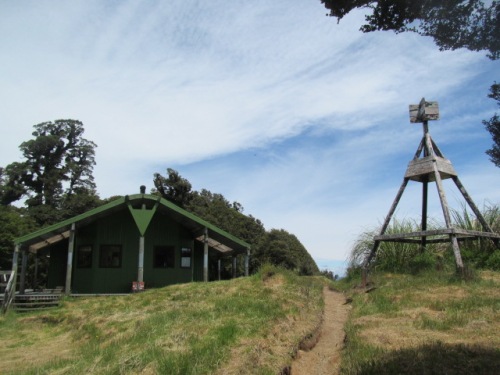 DOC estimates 5 hours for this section. We (shameless brag) made it to Panekire in just over 3, which left us a good 7 hours to gorge on scroggin, chat to the hut warden, admire the view, bask in the afternoon sunshine, chat with Conrad Smith**, cook dinner***, and play Settlers of Catan. Plus, arriving early means first pick of the bunks. Score! No clambering out of the top bunk for a late night toilet mission for this tramper.

* We’ve included ‘our time’ for two reasons. Firstly, of course, we like bragging. Secondly, and perhaps more importantly, we want to give a realistic time estimate for relatively fit folk.

**Note: The huts at Waikaremoana no longer supply gas, something us Yetis failed to realise. Thanks a million to Damian and some very kind trampers for sharing theirs!
** *Conrad Smith, as most Kiwis know (I didn’t) plays for the All Blacks. And, apparently, trains by tramping with enormous camping stoves on his back.

The second day was by far our longest, so we set off earlyish again, with bellies full of porridge and hearts full of trepidation (not really, but doesn’t it roll of the tongue nicely?). From Panekire, the track does a bit of gentle up-ing and down-ing, descends, then rewards you with lots of lovely flat stuff.

After a couple of hours, we met at Waiopaoa hut (one of the flash, newly built huts on the track) for a scroggin and swimming break. For real, this tramp has built-in lake swim breaks.

After a mighty chilly, but mighty refreshing dip, we ran into a ranger, who 1). warned us that the first hut we would think was ours would, in fact, be a rangers’ hut (ours would be another 1/2 hour along the track) and 2). told us that we had to do the optional  side trip to Korokoro falls an hour or so down the track. I, for one, wasn’t quite sold on the idea of adding a couple of km to an already long day, but (of course) we did it anyway, and (of course) it was worth it!

Back at the main track, we ate sandwiches (my favourite: peanut putter, jam, and bhuja mix on vogels. Don’t knock it till you’ve tried it.) and set off for the last 8.5km/3 hours. The track description promised a ‘brief climb’ right before Marauiti hut, which none of us were particularly looking forward to. It was, as promised, pretty brief but rather climby.

We passed by the fake-out ranger’s hut and spotted a wee corrugated iron building, nestled in the bush on the other side of the lake. Marauiti hut. Marauiti is one of the ‘old school’ huts on Waikaremoana– small, with a smashing mint green interior and 26 bunks squished together.

We had another dip in the lakeside (about 2mins from the hut), took a nap (uh, maybe that was just me), ate dinner, played Settlers of Catan, and slept.

The track from Marauiti hut is flat as a pancake. For the first couple of hours, we ambled through long grass alongside the lake. Our first stop was at Waiharuru hut. As soon as we arrived, I think we all regretted our decision to stay at Marauiti just a little. Waiharuru, the newest – and by far fanciest- of the huts, has individual bunks with dividing walls, pack storage spaces, and even little curtains! Plus, it has a whole separate building for cooking/dining/card-playing. Plus, it has male and female dressing rooms. Plus, it’s the same price as the other huts on the tramp. Luxury.

Anyway, once we had drowned our regret in scroggin, we got back on the trail. More flat, grassy track, and one small climb later, and we were at the last hut, Whanganui hut. We passed through Whanganui and went straight on to the Water-taxi point, the end of the track for some. Not for us. After the water taxi, it was another hour or so before we reached our finishing point, the Hopuruahine Suspension Bridge.

We arrived at the trail finish just before 1 o’clock. Having told our fantastic support crew (my Ma, Step-pa, and sister) to pick us up around 3 o’clock, we expected to have to wait a couple of hours. Luckily, due to (I assume) some incredible psychic link, they drove up about 10 minutes after we arrived, bringing clean clothes, ready salted chips, and the all important post-tramp cold coke.

Overall: A gentle, beautiful tramp. If we did it again, we’d probably add a little more mileage to our first day, stay at Waiopaoa hut, and continue on to Waiharuru for our second night.