I’m reading a book called Hand to Mouth to India. It’s quite a beautiful book, about an English lad called Tom who hitchhikes from England to India without any money.

The entire book is worth reading, but in light of current events his visit to Iran is eye-opening. I’ve mentioned before that my all-time favorite blog is Banchory to Bosphorus by Bike and that’s where I first realized that Iran is perhaps the most hospitable county on earth. Their stories were astounding, but they were on bikes and somewhat self-sufficient.

Tom hitchhikes or rides a bus (usually paid by friendly Iranians) across the country and even visits the Kurdish west in search of Sufis. The friendliness he constantly encounters is mind-blowing.

Consider his account of his first night in Isfahan. He has already been invited for dinner by the owners of a carpet shop and later, walking through the large public area (the largest in the world), meets a family from Teheran who invite him to join their dinner.

“They served up an impressive array of rice, meat dishes and soup and though I was still full from the eggs and bread I had to find room just so as not to cause offence. A common dilemma for visitors to Iran. I took out my sleeping bag to lay it out on the stone tiles and saw the son of the carpet shop owner running down to meet me. He insisted that he would sleep outside also, to ensure my safety on my first night in his city.”

“…[A]s soon as the other passengers on the bus heard that I was English, they poured handfuls of seed and nuts into my hands that were beyond my dexterity to open. As it was impossible to refuse on these occasions, my pockets were always crammed with bits of muesli throughout my time in Iran.” 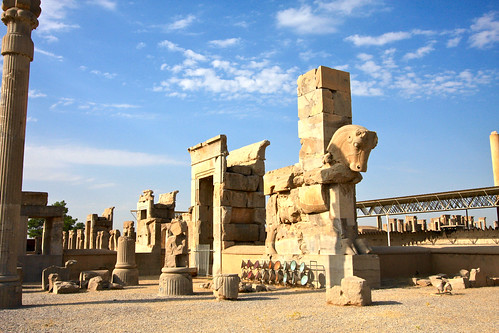 Tom has a postcard written in Farsi that states he is a broke, spiritual musician. When he presents it to the gatekeeper at the ruins of Persepolis, “[h]e bade me come in and play my clarinet. One Ray Charles ‘Hit the Road Jack’ boogie later, he loaded me up with chai and let me share his lunch of rice and chickpeas, before giving me leave to go among the ruins as I pleased.”

“The Iranians watched TV but only in rationed amounts and they still valued more the time to take a glass of chai and elicit another person’s viewpoint–and this was the people that the American government chose to make their national enemy? A more absurd example could not have been picked to present as a race of evil, scheming terrorists than these sweet and generous people.”

Friendliness to that extent in the west would be deemed insanity. There are many more examples of this, but his last point is the most cogent. America has fucked over a good deal of the countries in the world, but the fact that there are politicians pushing for war with Iran is utter madness. It makes the context of the US as “the Great Satan” seem depressingly appropriate.

Apart from voting in candidates who aren’t part of the big business oligarchy, I’m not sure what we as ordinary citizens (or non-US citizens) can do to prevent this. What could an ethical Stormtrooper on the Deathstar have done to stop the destruction of Alderaan? I’d be happy to hear all of your thoughts.