For the most part, Korea hasn’t changed too much in the 1+ year I was gone.  People are still wearing the same clothes, the same songs are playing in the shops, and the subway has just as many drunk old men as ever.

But the vegan scene has grown in leaps and bounds.  There was one Loving Hut which we frequented close to weekly.  (There are also two falafel places and quite a few Indian/Nepalese restaurants).  I have already been to two new Loving Hut Buffets here, and there are more to try.  Take a look at some of these overloaded plates: 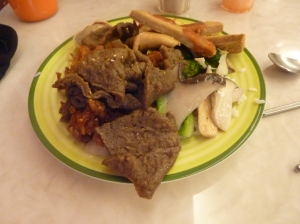